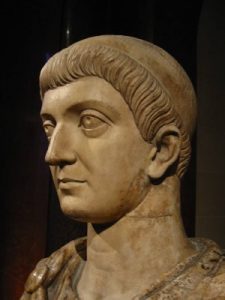 The full title of the Order is the Masonic and Military Order of the Red Cross of Constantine.  When you are installed, you become a Knight Companion of the Order plus the Orders of the Holy Sepulchre and St John the Evangelist.  So you will see that the Red Cross is actually three degrees and you are installed into all three at two meetings.  Although they are, to some extent, interwoven in content, they do have a separate history and structure.

The Order takes its name and ceremony from Constantine the Great.   It has a close association with the City of York as Constantine was acclaimed as emperor by the army at Eboracum (modern-day York) following the death of his father, Constantius Chlorus ,in 306 AD.  Constantine has strong Christian credentials, as it was he who convened the First Council of Nicaea in 325 AD at which the Christian Nicene Creed was developed.  It is still used in churches to this day, 1700 years later.  An agreement was also reached about which "books" were to be included in the Bible and how its present form was to be arranged.

The Red Cross ceremony itself is based around the conversion of Constantine to the Christian faith.

You can see why the members of the Division of North & East value the close connection of Constantine with York.

It is to be stressed that the Order is Christian and is thought by many to be the leading Christian Masonic Order.  Belief in the Trinity is paramount.  A prerequisite for joining is a membership of the Royal Arch.

The ceremonies of the Appendant Orders are thought by many to be some of the most beautiful and atmospheric in the whole of freemasonry.  A reason in itself to join.

Within North & East Yorkshire, we have seven Conclaves, details of which can be found on this website.  More information can be obtained from the Divisional Recorder, but this website includes a booklet for you to download.  An invitation to join is not required but your application will need to be proposed and seconded in normal masonic administration.